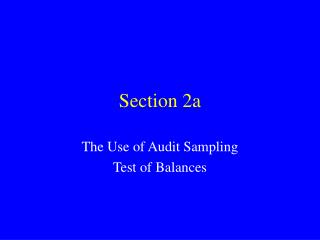 Chapter 0 Section 6 - . rational exponents and radicals. radicals and radical notation. the n is called the

Any questions on the Section 6.2A homework? - . now please close your laptops and turn off and put away your cell phones.

Geometry Section 6-2A Proofs with Parallelograms - . proofs with

The Target Standard 2a - . the government’s responsibility is to protect americans rights. did you

Chapter 5 Sections 7 and 8: Dividing Polynomials - . in this section, we will… divide polynomials by monomials divide

National 4 &amp; 5 Biology – multicellular organisms - . section 2a – stem cells. recap. how do we get all these

Section 2 - What the Duties are Between the Parties Engaged in the Contract of Sale - . outcome . students must be able

2003 MUTCD Chapter 2B Regulatory Signs - . 2b.02 design of regulatory signs . changeable message signs can be used to