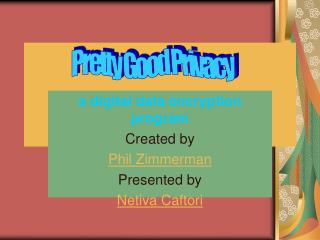 Pretty Good Privacy. a digital data encryption program Created by Phil Zimmerman Presented by Netiva Caftori. A word about PGP one of the strongest encryption tools available. Encryption is the process whereby codes are used to attempt to conceal the meaning of a message

ENCRYPTION Presented by Amit Choudhary - . encryption data that can be read and understood without any special measures

By: Loryn Zimmerman - The economic value of higher education: comparing the benefits of a four-year degree to those of a

Created &amp; Presented by Ross Parker - . introduction. welcome about me i teach at lightning speed : ) what do you

Animation sequence created by Phil Harrington http://www.philharrington.net - Just remember that you're standing on a