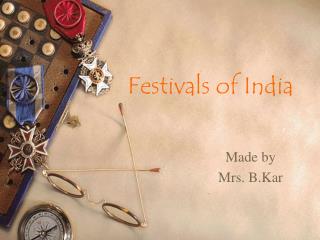 Festivals of INDIA - Republic day is india's great national festival. on 26th of january every year india celebrates its

Festivals of India - . india sometimes is known as the country of festivals. it is a secular country. we, here celebrate

Festivals of India - . india is a land of festivals and fairs. every day of the year there is a festival celebrated in

Festivals of India: Karwa Chauth - Karwa chauth fasting is done during krishna paksha chaturthi in the hindu month of

Most Popular Festivals of India - In india, there live people of many religions. secularism ties these multi-religious

Famous Festivals of India- CertitudeNews - Here, is the list of 21 famous festivals in india. we will also provide

USE OF FLOWERS IN FESTIVALS OF INDIA - Flowers possess the inherent ability to brighten any occasion, be it a birthday

Importance of Festivals - Significance of festivals yet bustling nature of individuals with their pressed calendar,

Festivals of CALIFONIA - . by jed and joe.b. event festivals. california has many festivals there are festivals like golf

Festivals In March In India, 2017 - Winter season is about to go and the month of march welcomes you with a spring twist.

Art Gallery India, Festivals in India, Art Artist in India - Art culture festivals - is one of the most popular culture