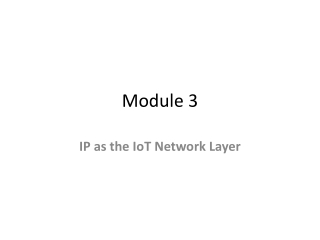 Module 3. IP as the IoT Network Layer. The Business Case for IP. Data flowing from or to “things” is consumed, controlled, or monitored by data center servers either in the cloud or in locations that may be distributed or centralized. Module 3 - . ethics and social responsibility. module 3. how do ethics and ethical behavior play out in the workplace?

MODULE 3 - . 3rd. 2nd. 1st. the backward design. learning objectives. what is the purpose of doing an assessment? how to

Module 3 - . lesson 9 – boltzmann distribution. objectives. must recall the shape and axes labelling for a boltzmann

Module 3 - . brain’s building blocks. development of the brain. fact that your brain does not develop into a nose is

Module 3 - . fluid flow. lesson 20 continuity equation. describe how the density of a fluid varies with temperature.

Module 3: - . hypertension, sodium, and lifestyle. this program meets the accreditation criteria of the college of

Module 3 - . “staffing the perfect practice”. quote: “that fatal assumption is: if you understand the technical