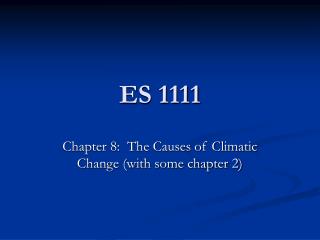 ES 1111. Chapter 8: The Causes of Climatic Change (with some chapter 2). Earth-Sun Relationships. Energy received from the Sun drives weather and climate, so it is obvious to start with changes associated with the Sun and our orbit around the Sun Introductory Chemistry 1111 - . james chickos room b435. what is chemistry?. chemistry is the study of substances in

Lecture 3 (9/23) METR 1111 - . metar surface observation code. what is metar?. metar is the the international standard