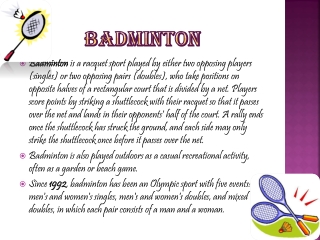 Badminton is a racquet sport played by either two opposing players (singles) or two opposing pairs (doubles), who take positions on opposite halves of a rectangular court that is divided by a net. Players score points by striking a shuttlecock with their racket so that it passes over the net and lands in their opponents' half of the court. A rally ends once the shuttlecock has struck the ground, and each side may only strike the shuttlecock once before it passes over the net. Badminton History/Game - . originally started in india as a game called “poona”. badminton is a skilled game that

Essential Benefits of Playing Badminton Game! - Presently since clear that badminton has such huge numbers of advantages,

Badminton - . we sometimes play badminton during pe. we played it during active schools week also. it was great fun! .

badminton - Chris sports has been the go-to store for a wide collection of the latest outdoor, athletic, and indoor

Badminton - History badminton was invented long ago; a form of sport played in ancient greece and egypt. the game was

Badminton - . history. badminton was invented long ago; a form of sport played in ancient greece and egypt. the game was

BADMINTON - Underarm strokes . badminton . btec sport. task 1 back to back. 10 minutes. task 1 . in pairs, students are

Badminton - . history. badminton was invented long ago. played in ancient greece and egypt. the name badminton came from

Badminton - . history. what is battledore ? thousands of years ago, a game called &quot; battledore and shuttlecock