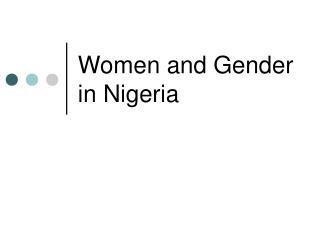 Women and Gender in Nigeria

Women and Gender in Nigeria. Relative Political and Economic Power. Only 56% of women are literate Only 32% of people in the government are women Only 7.5% of the Nigerian National Assembly (aka Congress) seats are held by women Only 22% of women have access to bank loans

Women and Gender in Nigeria Why men don't want the jobs mostly done by women - On business standard. such jobs require different skills and more

Things Fall Apart - . by: chinua achebe. african culture. there are many different people groups and tribes across the

Things Fall Apart - . by chinua achebe. an introduction. “although i did not set about it consciously in that solemn

Japan’s Cooperation for Rural Water in Senegal and its impact on Gender - . 29 may 2008, gender and infrastructure