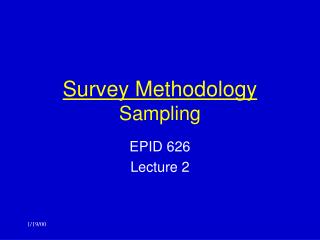 Survey Methodology Sampling. EPID 626 Lecture 2. What is sampling?. Population: The collection of all possible measurements that could be used to address the study question. Sample: (v.) To select a small subset of a population representative of the whole population. (Fowler, 1993).