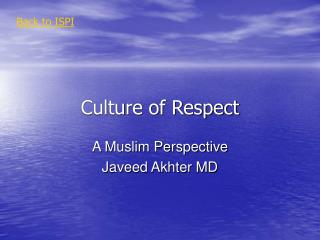 Back to ISPI Culture of Respect A Muslim Perspective Javeed Akhter MD Objectives. Discuss multi-culturalism and pluralism. Point out the differences between tolerance and pluralism. Review the Muslim attitude toward pluralism. Outline some common challenges facing a Muslim patient.

WHAT IS CULTURE? - . culture. is a key concept in anthropology. the term is now widely adopted by other social sciences