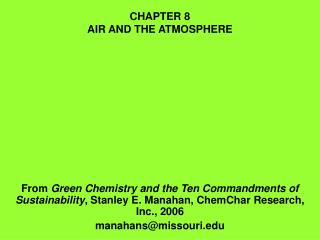 CHAPTER 8 AIR AND THE ATMOSPHERE

CHAPTER 8 AIR AND THE ATMOSPHERE From Green Chemistry and the Ten Commandments of Sustainability , Stanley E. Manahan, ChemChar Research, Inc., 2006 manahans@missouri.edu 8.1. MORE THAN JUST AIR TO BREATHE A Sea of Gas

CHAPTER 8 AIR AND THE ATMOSPHERE

Chapter 1 THE AIR AROUND US - . air: the invisible, odorless, and tasteless mixture of gases that surrounds earth.

Chapter 6 Atmospheric and Oceanic Circulations - . wind is a vector variable temperature is a scalar variable.

The Air Around You Chapter 7.1 - . atmosphere. the earth has gases all around. this layer of gas surrounding the earth is

Chapter 3: Introduction to the Atmosphere - . image courtesy of cimss.ssec.wisc.edu. importance of earth’s atmosphere.

Chapter 16 Section 1 Earth’s Atmosphere - . * a thin layer of air that forms a protective covering around the planet .

Chapter 7: Atmospheric Disturbances - . part i: midlatitude disturbances. the impact of storms on the landscape.

Chapter 11 Heating the Atmosphere - . weather and climate . weather weather is over a short period of time constantly

Chapter 8 - . air pollution and energy use. sources of air pollution. the combustion of gasoline and other hydrocarbon

What is the answer to… - . these fun and exciting vocabulary terms from science unit b????. layer of air that