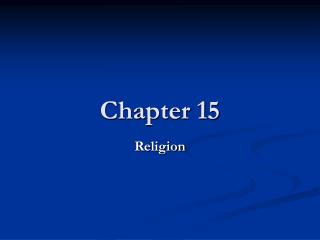 Chapter 15 Religion Chapter Questions What is religion? What does religion do in a society? How are religious beliefs and rituals different in various cultures? What roles do sacred stories and symbols play in relation? What are some common key elements in religious rituals?

Chapter 15 Rizal’s Second Sojourn and the Universal Exposition of 1889 - . difficulty of finding a quarter universal

CHAPTER 15 PERSONAL DEVELOPMENT - . personal development embraces all those traits and activities which enhances the

Chapter 15 - . ionic bonding. valence electrons. do the electron configuration for the following elements li be b o f ne.

Chapter 15: Regulation of Gene Expression - . anablep anablep with its “4 eyes”. upper half of lids look aerially