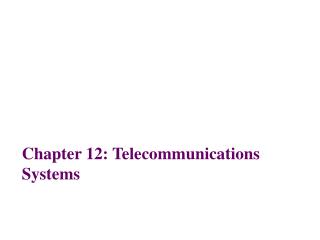 Chapter 12: Telecommunications Systems. Objectives. Identify the basic elements of a telephone system, and discuss the limitations of telephone signals Describe the composition of the telephone industry before and after the 1984 Modified Final Judgment, and explain the differences

BASIC TELECOMMUNICATIONS - . introduction to telephony and pots lines. basic telecommunications. the first patent for a

Chapter 12: Communication and Governance - . key concepts in chapter 12. the perception that corporations lack

Chapter 3 Networks and Telecommunications - I. why networking 1. purpose of networking: connect computers for the purpose

Chapter 12 – Work and Machines - . work is when a force is used to make something move. work = force (distance) work