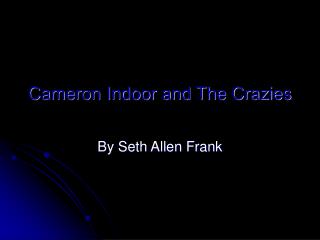 Cameron Indoor and The Crazies

Cameron Indoor and The Crazies

Animals of the Antarctica by Cameron Mayes - . antarctica is the southern most continent on earth. so where is

Beatniks By: Cameron Seymour - &quot;nobody knows whether we were catalysts or invented something, or just the froth

What is bioremediation? - . the use of bacteria and fungi and plants to break down or degrade toxic chemical compounds