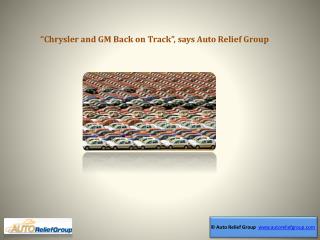 The net income is no longer in red for automotive giants Chrysler and GM who once filed for bankruptcy in 2008. As of April 2010 the total U.S. sales have increased to 12.1% and 2% for GM and Chrysler respectively. Chrysler’s first quarterly report, for the year 2010 shows that the cash flows for the company have turned positive. And, GM posted a net income of $865 million on $31.5 billion in sales. Getting Back on Track - . investigating finding the expenditures from physical operation, and profit/loss reports.

Back Track - . security suite open source based tools live cd based on slackware linux highly rated within the community.

The Baccelerator: Back on track… - . the vector – psb1c3. high copy biobrick assembly plasmid. 3a assembly

Back on track – or off the rails? - A report by stephen glaister, professor of transport and infrastructure, imperial

Get Back on Track with your Credit - . thank you for joining us!.

Get Those Fashion Vibes Back On Track - Saveplus is an online coupon providing a website that presents the best coupons,

6 Steps to Get Back on Track - You planned for this year to be different. you told family and friends this year would be

Back on Track Chiropractic & Wellness Centre In Burlington - Are you suffering from body pain since long time? visit