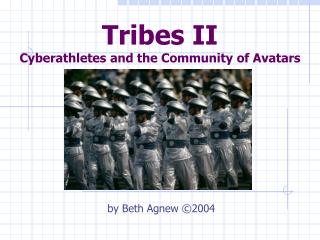 Tribes II Cyberathletes and the Community of Avatars

Tribes II Cyberathletes and the Community of Avatars by Beth Agnew ©2004 What is Cyberanthropology? Cyberanthropology is the study of humans in virtual communities and networked environments. It redefines the idea of “human beings” to include androids and artificial intelligence.

Tribes II Cyberathletes and the Community of Avatars

Israel’s National Promises “The Throne of David” - . the story so far…. . abraham. . jacob “israel” and the

The anglo-saxon era 449-1066 - . invasion of britain of the germanic tribes to the battle of hastings. anglo-saxon

The Great Plains... - The great plains. the buffalo nations. the region. bounded by the rocky mountains in the west, and