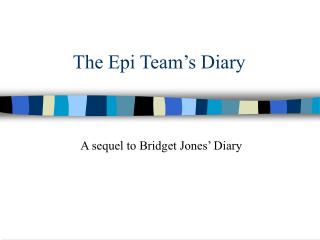 Team Cohesion in Sport - . chapter 15. defining team cohesion. a dynamic process which is reflected in the tendency for a

Choose your diary - . 15/10/13 learning outcomes. describe the situation in detail. explain ways in which you supported

Kaizen Team Primer - . meeting date team members. it’s not about the “tools”. it’s about the application! the

Compare and Contrast Essay - . the outsiders the diary of anne frank flowers for algernon. planning and brainstorming.

Holocaust - Diary of Anne Frank Web Quest - . through the use of the resources in this web quest, you have the

Team Building - . sharon doner-feldman training for you. what is teamwork &amp; team building. teamwork concept of