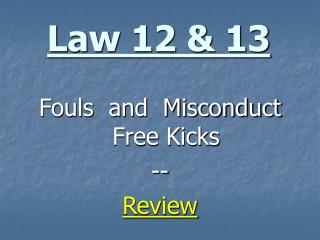 Law 12 & 13 Fouls and Misconduct Free Kicks -- Review Soccer should be Safe, Fair, and Fun. When it stops being safe or fair, the referee stops play. Foul Criteria Ball is in play Occurs on the field

Safe Chemical Handling - . session objectives. you will be able to: recognize hazards posed by materials know how to

U.S. Soccer Referee Department 2012 Grade 8 – Law 11 Offside - . objectives. at the end of this lesson the student will

Safe Loading of Vehicle and the Use of Securing Devices - . course objectives:- on completion of training, students will

Fans at Euro 2012 - Football without fans looses most of its beauty, especially at the euro cup tournaments. some happy,

Soccer Jeopardy - . created by sean o’brien. how to play soccer jeopardy. there are 3 categories to choose from.