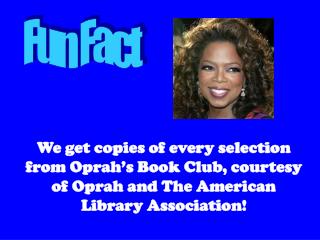 Fun Fact We get copies of every selection from Oprah’s Book Club, courtesy of Oprah and The American Library Association! Fun Fact Oprah’s latest book is Say You’re One of Them by Uwem Akpan Please Amazing Fun Facts About the Skin - You probably touch your skin about a thousand times every day, but how much do you 10 SlideShare Fun Facts (Infographics) - I hope you liked the fun facts as much as i liked documenting them. beyond the

Cool Facts About Gold - Here a re a few cool facts about gold that you may not know, plus 3 ways we use gold each day.

Fun Facts about Singapore - By: kay winston. fun facts about singapore. singapore consist only of one main island and 63

FUN FACTS! - . about religions and belief systems in the world. buddhism currently has about 376 million followers and is

Fun Facts About Robins - . ……..robins……. robins have orange breasts that sticks out and they make no effort to

Fun with fact sheets! Creating materials to support your policy goals - . what is a fact sheet?. a fact sheet is a

Fun Fact! Imagine this… - . a human chain formed by joining your left hand to your mother's right hand, &amp; your

Fun Fact: Though you have 2 kidneys, you can survive with 1 with no loss of life expantancy - . homework check: