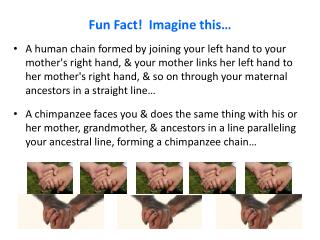 Understanding Fact and Opinion - . building blocks of persuasive writing. essential question. what is the difference

Imagine… - . you and everyone from the school is on a deserted island with just enough food for all of you. imagine.

Fact or Fib Showdown! - . fact or fib showdown is a great formative assessment strategy. students have fun and get

Fact or Opinion - . what is a fact?. a fact is something that can be proven . . how can you prove these facts?. the

Monkeys - . by paige galli and mia k upershteyn. fact 1. monkeys can live for 20 years or more. f. fact 2. monkeys do

A Discussion of What is Possible - . prepared for ethiopia september 4 th ,2003. imagine if…. … communities were

Can you imagine a world without currency? - . imagine a country without international trade? how long barter system

I Can Only Imagine (By MercyMe) - .  i can only imagine what it will be like, when i walk by your side. i can only

5 Fun Facts About Bed Bugs Hiding In Your Mattress - Bed bugs are a common problem in sydney. most of us don’t have

Fun Facts 1/3 of Americans drop out of high school - ½ of african american and hispanic students drop out (vail, 2004)