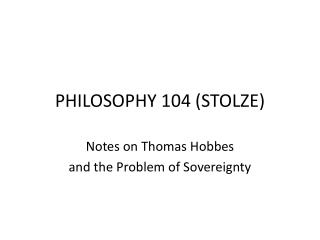 PHILOSOPHY 104 (STOLZE) Notes on Thomas Hobbes and the Problem of Sovereignty Two Key Problems of Political Philosophy Political Sovereignty : “What, if anything, could justify the existence of the state?”

Philosophy of Science - . can you point to science?. ancient. philosophy, even from it’s most ancient beginnings, has

Stuckism and Punk Philosophy: controversialism in the fine art environment

Phil 3318: Philosophy of Science - . categorization &amp; the influence of auxiliary hypotheses . not truth

The importance of Catholic Philosophy - . what is philosophy?. philosophy is an exploration of the most basic questions

Who am I? What am I? Philosophy of Mind - . brent silby unlimited (upt). personal identity. what makes you the person

Some notes on the Philosophy of Human Labor - . introduction:. the manifesto of the communist

Love’s Philosophy - . percy bysshe shelley. the fountains mingle with the river. and the rivers with the ocean. the

Philosophy -- the very idea - . the critical evaluation of and employment of standards of correct thought – especially

Three Branches of Philosophy: - . epistemology: how do we know? . metaphysics: what is the nature of the universe ?.

Chapter 1 - Developing Your Coaching Philosophy - . i. why philosophy? reasons to have a well-developed coaching

PHILOSOPHY 102 (STOLZE) - . notes on dale jamieson, ethics and the environment , chapter 6. the value of nature.