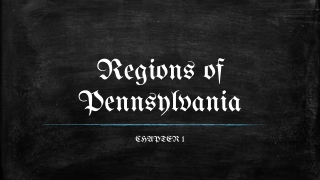 Regions Of Pennsylvania - . a region is a large surface of land area that has some feature in common. atlantic coastal

Waterforms of Pennsylvania - . lesson 2. 5 themes of geography. 1. l ocation – location of city or your community 2. p