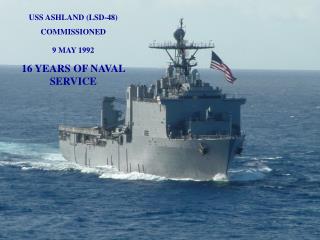 USS ASHLAND (LSD-48) COMMISSIONED 9 MAY 1992 16 YEARS OF NAVAL SERVICE ASHLAND History Ashland is the eighth and last ship of the WHIDBEY ISLAND (LSD 41) Class Ships. Ashland is the second ship to bear the name. The Keel was laid on 4 April 1988 at New Orleans, LA.

Computer History - . how we got to where we are and what’s next. the abacas was one of the first calculators. the

DOLCH Sight Word Test - . (say each word as it appears on the screen.). click this button below to start the slide show.

Slide 17-1 - . c hapter. retailing. slide 17-2. after reading this chapter you should be able to:. identify retailers in

Computer History - . how we got to where we are and what’s next. the abacas was one of the first calculators. the

Biochemistry - . mr field. using this slide show. the slide show is here to provide structure to the lessons, but not to

Unit 6 Exam Questions - . directions. click the indicated icon to begin the slide show press the right arrow key on the