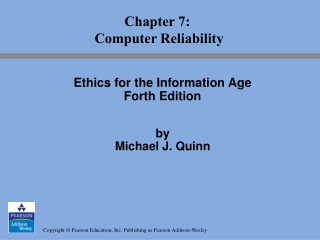 Chapter 3. Reliability: - . as my grand pappy, old reliable, used to say . . . who is this famous bloodhound? what was he

Chapter 7: Computer Assisted Analytical Techniques - . the first rule of any technology used in a business is that

TOPIC 7 Reliability or Relevance - . learning outcomes. understand the linkages between issues of recognition and