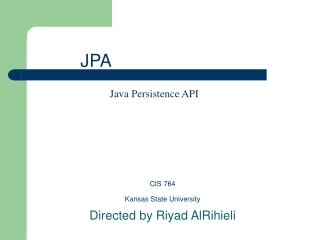 CIS 764 Kansas State University. Directed by Riyad AlRihieli. JPA. Java Persistence API. Review Topics:. Introduction what is the JPA? What is the JPA contains of? Why developers should Create the JPA? Is there Relationship between the EJB and JPA?