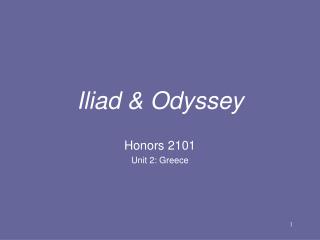 Introduction to The Iliad - . by: homer. “the iliad is a powerful, beautiful, and awe-inspiring work of ancient greece.

The Iliad - . by homer. homer. homer was a greek bard ! (poetic story-teller) the iliad was composed sometime between 900

The Iliad: Book 6 - . by: cameron c. and amira h. characters. hector : a trojan prince, the leader of the trojans in the

The Iliad as Archetype… - . like other examples of great stories, the iliad follows an archetypal pattern. with a small

The Iliad and The Odyssey - . based on stories first told over 3000 years ago in what is now greece the stories are about

Themes in “The Iliad” Duty to Gods Duty to Country/Family Honor vs. Pride Forgiveness - Literature notes the iliad.

The Death of Hector from the Iliad by Homer, translated by Robert Fagles - Literary skill: the epic simile advanced

Characters in the Iliad - . western literature and composition i. the achaeans. also known as the argives or danaans.

The Iliad - . an epic poem b y homer. the iliad - background. the epic form oral tradition provides form and structure to

Homer’s Iliad - . re-cap of book i. apollo is mad that agamemnon (son of atreus ) has stolen chryseis (daughter of

The Iliad Background - . Ἰλιάς or “the tragedy of achilles”. the epic. epic long narrative poem follows the

The Iliad and the Trojan War - . miss michel english i. the iliad . wwp.greenwichmeantime.com. the iliad starts nine

The Odyssey Background Notes - . written by homer. the iliad and the odyssey are epic poems that were composed in greece