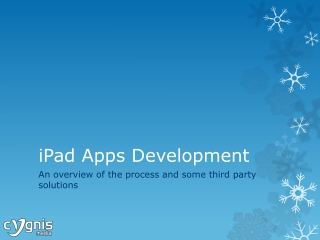 The iPad application development is slightly different from the iPhone app development. There are many reasons for it which includes screen size, portability, business apps, and usage. According to a report almost every Fortune 500 company is using iPad apps as part of their marketing strategy. This alone can give you an idea how iPad app development is selling like a hot cake in the market. This presentation provides you an overview about iPad app development and overview of some of the resources used by iPad app developers. Hope you will like and share it. iPad Apps - . presented by: josh and alicia. ipads in your school. 30+ ipads from cdjh please give us feedback about the

iPad Apps Development at Axis Technolab - At axistechnolabs, we understand that just having good ipad application is not

iPhone and iPad apps - . apps shipped with devices apps we use apps for the future. appy hour: summary sheet. visual

Download Apps to iPad - More details: http://www.leawo.org/tutorial/download-apps-to-ipad.html on an ipad, games and

Best Apps For IPad - The best apps for ipad are found in ios 5 or higher. there are thousands of apps available for free.

myPDV iPhone/iPad Apps - Mypdv (my personal data vault) - the smart way to store, access and organize your data and

The iPad: Apps and Beyond ! - . everything that you need to know to make this tool work for you. our new toy. self rating