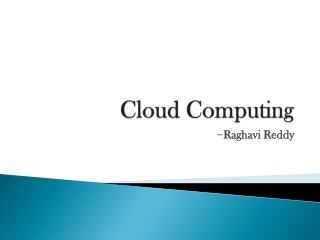 Cloud Computing. - Raghavi Reddy. Introduction. With traditional desktop computing, we run copies of software programs on our own computer. The documents we create are stored on our own pc.

Cloud Computing - . by heather, cindy, lisa and allison. what is cloud computing?. the “cloud” refers to surplus

CLOUD COMPUTING - . by: dhruv seth ds@sethspro.com. what is cloud