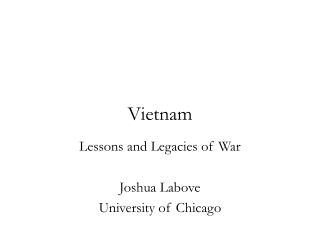 Vietnam - . transition from socialism and awakening capitalism. over 82 million people but only 25 percent urban

Vietnam - . by katlyn mckinley and tyson erwin!. asia. vietnam is located in asia and it’s very hot there. school. kids

Vietnam - . objective: be able to understand the vietnam war up through lbj’s announcement not to run both its causes

Vietnam - . lessons and legacies of war joshua labove university of chicago. what, where, who is vietnam?. population: 85

Vietnam - . statistics and history. 87 million people 1000 year occupation by the chinese from 111 bc to 939 ad different

Vietnam - . using your reading, complete as much of the mad lib notes as possible. you will have 5 minutes. conclusion on

Vietnam - . the media’s role in

Vietnam - . enlightening you about our regretful past. visual aids. cont. the story. conflict broke out between u.s.