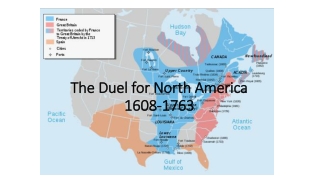 The Duel for North America 1608-1763. France Finds a Foothold in Canada. Similar to the English and Dutch, France was late to colonization 1500s: religious wars (Protestant vs. Catholic) and foreign wars In 1534, the French explorer Jacques Cartier came to Canada and claimed it for France.

4.1 The French and Indian War - . thesandwichjourney.blogspot.com. i can… summarize the causes of the french and indian