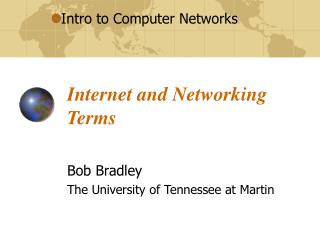 Internet and Networking Terms. Bob Bradley The University of Tennessee at Martin. The Internet. The global collection of connected networks that use TCP/IP protocols.

Introduction to Networking - . definitions and terms. chapter objectives. after completing this chapter you will: be able

INTERNET BASICS - . prepared by ashis mitra for b.com , st. xavierâ€™s college. a. internet concept. what is

1.7 The history of Computer Networking and the Internet - . 20 minutes of joy with patric and andreas. the switching

CH3: Networking - . more than just a social interaction. networks. computers are useful alone, but are better when

Computer Networks - . igcse ict section 4. introduction. objective: to be acquainted with: the definitions of networking

Networks and the Internet - . a network is a structure linking computers together for the purpose of sharing resources