Approaches to the measurement of excess risk - PowerPoint PPT Presentation 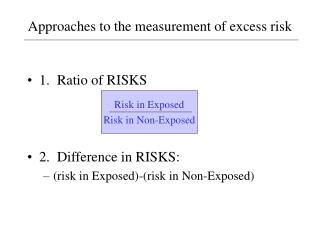 Approaches to the measurement of excess risk

Approaches to the measurement of excess risk

Market Risk - . class 23 - chap 10. lecture outline. purpose: to understand what market risk is and how it is measured

Disease Association II and Measures of Attribution Main points to be covered - . measure of disease association in

Why New Approaches to Credit Risk Measurement and Management? - . why now?. structural increase in bankruptcy. increase

Presentation on Financial Risk Management Market Risk Treasury Operations - . highlights of the presentation. what is

Class 2 Measuring Market Risk - . what does the company measure risk for?. what can we say about sberbank shares? what

Why volatility is (still) an inappropriate risk measure for real estate - . outline. background. by moritz müller,

Value at Risk - . christine brown associate professor department of finance the university of melbourne. plan. what is