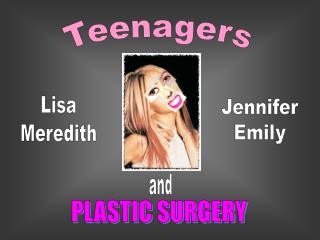 Teenagers. Lisa Meredith. Jennifer Emily. and. PLASTIC SURGERY. The effects of plastic surgery in the media on Teens. Television Shows like “Extreme Makeover” and “The Swan” are fueling the desire of teens to change their appearance permanently.

Teenagers!!! - . the term ‘teenagers’ was not used until 1950 often people would get married an move out of their

Teenagers Questionnaire - . transporting emotions comenius project 2009 - 2010. why a survey. it was necessary to find

Teenagers today… - . they are…. lazy. immature. ammoral . interested only in parties, ipods , video games, and

Teenagers Questionnaire - . transporting emotions comenius project 2009 - 2010. why a survey. it was necessary to

Teenagers and Dating - . chapter 6, section 2. courtship and dating. interaction between men and women prior to the rise

The 1950s Teenagers - . by: kevin kelly. teenagers of the 1950s were against conformity so they did whatever they could

Teenagers and drugs - . many parents worry about whether their teenagers are taking illegal drugs, how they can tell, and

Teenagers For Christ - . remember your creator in the days of your youth. - ecc. 12:1. teenagers for christ. start young.

Teenagers and Alcohol - . objectives. get to know other parents and share family rules. understand the school ’s