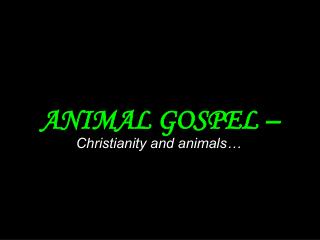 ANIMAL GOSPEL – Christianity and animals… Religion have a great influence o n how we look at the world. It has even greater influence on the way our morality is constituted.

Chapter 18 - 0. chapter 18. the evolution of animal diversity. what am i? of some 1.5 million species of organisms known