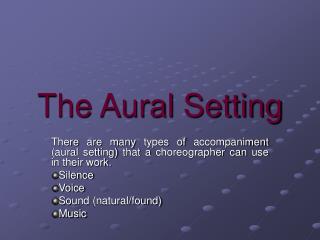 The Aural Setting. There are many types of accompaniment (aural setting) that a choreographer can use in their work. Silence Voice Sound (natural/found) Music. With no sound a dance must be strong and clear having it’s own rhythm and form.

Universal Precautions in the School Setting - . mission statement to improve the quality of life through better health by

PBIS in The Kindergarten Setting - . creating positive and productive early childhood environments. norms. purpose. i can

1. SETTING (ST) - . the time and place of action of a story. 2. character sketch (nf). a shorter piece of literature that

THE HOLY QUR’ AN THE RISING AND SETTING OF THE SUN &amp; LAND LOSS AT THE EXTREMITIES - . based on the works of