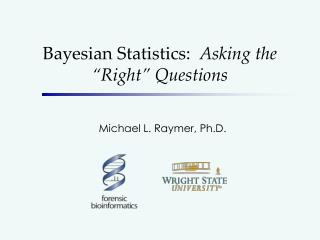 Bayesian Statistics: Asking the “Right” Questions. Michael L. Raymer, Ph.D. Statistical Games. “The defendant’s DNA is consistent with the evidentiary sample, and the defendant’s DNA type occurs with a frequency of one in 10,000,000,000.”.

Bayesian Integration (MCMC II) - . lecture 10. why diagnostic statistics?. there is no guarantee, no matter how long you

Statistics In HEP - . how do we understand/interpret our measurements. outline. what is probability : frequentist /