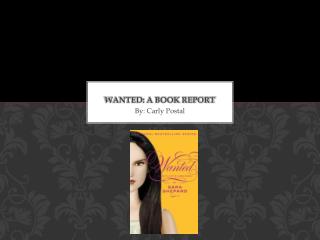 Wanted: a book Report. By: Carly Postal. Main characters. Hanna Marin- Spencer Hastings- Aria Montgomery- Emily Fields-. Hanna Marin. Loves to shop Obsessed with popularity Weight insecurity’s Will do anything to be “Number One” Protagonist, being stalked by “A”. Spencer Hastings. Everything You Ever Wanted to Know About Migrating From Informix to DB2 * But were afraid to ask - . j.warren donovan bob

Everything You Wanted to Know About Tanks But Were Afraid to Ask - . aboveground storage tank systems. outline.

Everything you wanted to know about ADAAA, but were afraid to ask! - . joe bontke eeoc houston district office texas

All You Never Wanted to Know About GLP and GMP - . research. by fda standards . . . a very uncontrolled, undisciplined

Everything You Ever Wanted to Know About ClinicalTrials - .gov. (slides for presentation only.) deborah a. zarin, m.d.

Everything you always wanted to know about EBN but were afraid to ask… - . carl thompson and nicky cullum centre for

Everything you ever wanted to know about Student Loans - . … and a few things you’ll wish you never had to know.

Everything you ever wanted to know about Student Loans - . … and a few things you’ll wish you never had to know.

Everything You’ve Ever Wanted to Know About: - . tuition structure billing information meal plans bookstore and

Some Kittens Can Fly! - . a children’s book by eric spanitz. isabelle was sad. she wanted to cry. then she remembered: