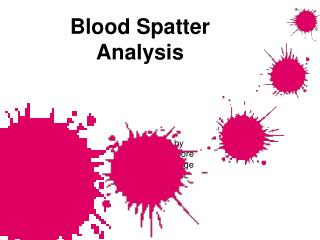 Blood Spatter Analysis. compiled by Prof. John Moore Parkland College Champaign, IL. “I see no more than you, but I have trained myself to notice what I see.” Sherlock Holmes, “The Adventure of the Blanched Soldier”. How did it get there?????. “passive” projected BLOOD - . hematology. the study of blood, blood forming tissues, and their disorders. functions of blood. transportation

The Circulatory System - . the heart, blood vessels, blood types. systemic circulation. with blood returning from the

Hematology - . anemia. deficiency of red blood cells and/or hemoglobin reduced ability of blood to transfer oxygen to the

Catalyst: (Top of page 72) What are the four main components in your blood? - . agenda catalyst quiz and melcon return

Blood Spatter Analysis - . swab – use a web swab to transfer the blood onto the swab (must allow it to dry!) scrape –