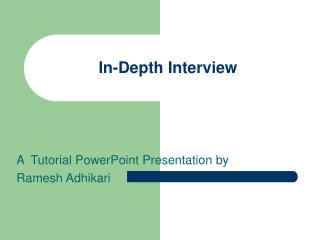 In-Depth Interview. A Tutorial PowerPoint Presentation by Ramesh Adhikari . What is an in-depth interview?. Doing Research Project One: The In-Depth Interview - . the purpose of this presentation is to offer a more detailed

BIRT In Depth - . extending and using the birt framework. birt in depth – who are we? who are you?. who are we? scott

JavaScript in Depth - . svetlin nakov. telerik corporation. www.telerik.com. table of contents. what we know so far

Enzymes In Depth - . with ph!. ph. enzymes. globular proteins built from amino acids that have acidic and basic

Reading in-depth - . what is comprehension?. comprehension involves responding to, interpreting, analysing and evaluating

Reading in Depth - . 乐 清 中 学 张 慧. have you ever not wanted to do something so badly that you would rather die