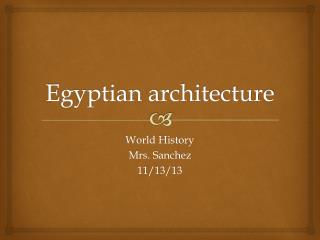 Egyptian Architecture - . massive structures came to be favoured from the old kingdom on. mud brick was the principal

Egyptian Art and Architecture - . do now . who is at the top of the social structure in egypt? why is this? which

Egyptian - . hellenic. rome was based on greek ‘democracy’, where the people (citizens) were the chief power. rome

Greek and Egyptian Influence on Art Architecture and Religion - . alexander the great mosaic – house of the faun (p).

Egyptian Mummification - . do now. take out your lesson 4.2 fact-finders and let’s discuss the following: why did