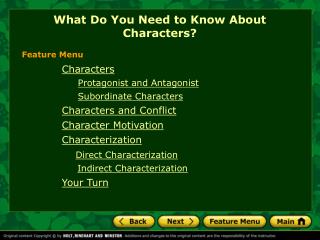 Characters in Stories - . asl literature in english. characters: definitions. an imagined person who inhibits a story an

Characters of the Trojan War… - . you and a small group need to create a “web” of the following characters from the

Much Ado About Nothing - . by william shakespeare. components of a shakespearean comedy. a greater emphasis on situations

Characterization: - . the act of creating and developing a character. characters may be either round or flat . round

The Characters Of Macbeth - . read the following powerpoint which describes all of the major characters of macbeth and

Creating Interesting Characters - . some people think that an exciting plot is all it takes to make a story good, but in

How does an author develop characters? - . character- individual in a story, poem, or play. a character always has human

We Are Marshall - . fact vs. fiction. characters. the characters of annie cantrell and paul griffen were not real people.

How Do Characters in Conflict Influence the Plot of a Story? - . feature menu. characterization describing appearance

The basic of Chinese characters’ learning - . hua long department of medicine, u of t ( 2008.06). ordering feature of