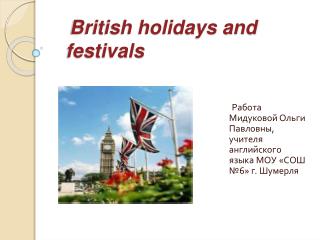 British holidays and festivals. Работа Мидуковой Ольги Павловны, учителя английского языка МОУ «СОШ №6» г. Шумерля. Many festivals and holidays in Britain are centuries old. Every town and village has its own traditions. My work contains the most important and popular events in Britain . .

European Festivals Association - . the voice of hundreds of festivals across europe and beyond. www.efa-aef.eu

Festivals - . the rules: your investigation must have a front cover after giving information about each festival you must

Festivals and Holidays - . the lord of the miracles . the inty raymi festival. the brazilian carnival . project

The Holidays in the USA - . a time for families to enjoy themselves and show their love. teresa reen jan. 2010 east side

BRITISH HOLIDAYS AND FESTIVALS - . chapter 8. holidays and customs and their origins tell us what is important in a

BRITISH HOLIDAYS AND FESTIVALS - . holidays and customs and tell us what is important in a culture. most holidays create