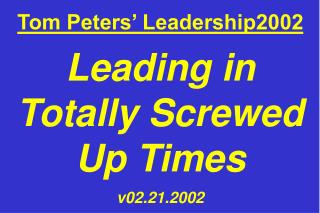 Tom Peters’ Leadership2002 Leading in Totally Screwed Up Times v02.21.2002. The Context. “There will be more confusion in the business world in the next decade than in any decade in history. And the current pace of change will only accelerate.” Steve Case.