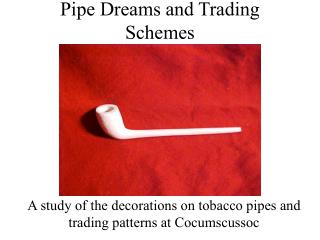 Pipe Dreams and Trading Schemes. A study of the decorations on tobacco pipes and trading patterns at Cocumscussoc. A History of Colonial Pipes. Tobacco smoking first became popular in England around the 1570s DTFL Unit 8 - . mishaps. apology / apologize. i’m sorry i cheated on you with your best friend. don’t leave me!.

Never be afraid to share your dreams with the world, because there ’ s nothing the world loves more than the taste of

Dreams in Art - . a comparison of the art of the aboriginal peoples of australia and the european surrealists. the

Prevention of Insider Trading Through Disclosure - . insider trading (it) theory classifying it it prevention under