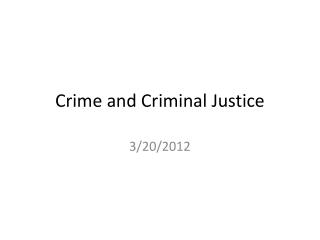 Crime and Criminal Justice. 3/20/2012. Learning Objectives. Use knowledge and analyses of social problems to evaluate public policy, and to suggest policy alternatives, with special reference to questions of social justice, the common good, and public and individual responsibility .

Criminal and Juvenile Justice - . chapter 20. essential questions. what types of crimes are common in our society? how

Comparative Criminal Justice - . measuring and comparing crime in and across nations. ways to improve the comparability

Why do we need crime and criminal justice statistics? To develop targeted policies - Oas-unodc cooperation in