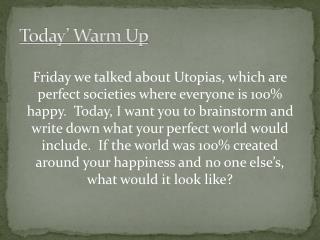 Today’ Warm Up. Friday we talked about Utopias, which are perfect societies where everyone is 100% happy. Today, I want you to brainstorm and write down what your perfect world would include. If the world was 100% created around your happiness and no one else’s, what would it look like?. No Warm-Up today. You have a Quiz  - Clear your desk of everything but a calculator and something to write with. .

Warm-up (use pencil today) - . 1.what type of cross does the visual below represent? (hint: see word wall terms) 2. how

Warm Up: - . octet rule. a filled layer contains 8 electrons exceptions (after bonding…) h and he will have 2 beryllium

Warm Up - . problem of the day. lesson presentation. lesson quizzes. warm up complete each sentence. 1. angles whose

Warm Up - Preview. warm up. california standards. lesson presentation. warm up 1. find the slope and y -intercept of the

Warm Up - . have out your decoding the constitution worksheet prepare for notes. know this for the quiz fo’ real!. warm

Warm-up - . a newspaper article about an opinion poll says that “43% of americans approve of the president’s overall

Warm up - . explain how you think the slave trade began. primary source. read the first hand account of what it was like

Warm Up - . an important part of acting like a scientist is to communicate your findings we will have a share out about

Warm-Up - . what areas of your essay are you struggling with right now? your thesis? research? blending quotes? analysis?