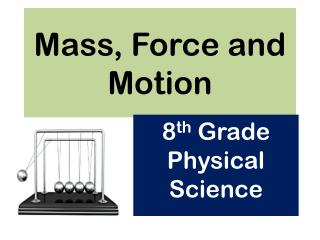 Mass, Force and Motion. 8 th Grade Physical Science. S8P3. Students will investigate the relationship between force, mass, and the motion of objects. Demonstrate the effect of balanced and unbalanced forces on an object in terms of gravity , inertia , and friction . . What is a force?.

Chapter 15 - . force and motion review. the overall effect of force acting on an object. net force. the force of

04 : Forces &amp; Newton’s Laws of Motion - . a force is a push or pull exerted on an object. a force causes change

Chapter 4 - . mass, weight and density. newton’s first law of motion. an object at rest will remain at rest and an

Forces and Circular motion - . i. force. a. definition: a push or pull acting on a mass 1. force is a vector quantity

Equations for Force - Laws of force. newton's laws of motion are the mathematics behind force and its application to

Forces - . a push or a pull. when one object pushes or pulls another object, the first object is exerting a force on the