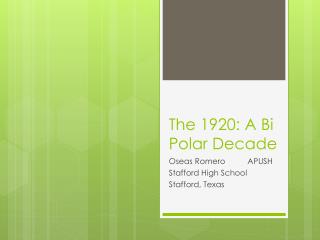 A really tough decade! - . this could well be a very tough investment climate think ‘wealth preservation’ before

The close of a decade - . 1956-1959. hollywood’s attack on tv. television is now a permanent fixture hollywood’s

The Thirties: A decade of despair - . aka: the dirty thirties. why did the depression begin? the stock market crashed on

A Republican Decade - . warren g harding. republican elected in 1920 looked like a president promised a “return to

The Angry Decade: - . the sixties by paul

A Republican Decade - . chapter 21 section 1. thoughts to ponder…. how did republican leadership during the harding and

The 1920’s – A Decade of Transition, Contradiction and Conflict - . the red scare: what was the “red scare” of

The Thirties: A Decade of Despair - . falling off the economic edge socials 11. recap: the end of the boom. unemployment

Aim: A Bi-Polar, Tri-Polar, or Multi-Polar World? - . the effects of us-china rapprochment. stalin and mao chinese

A Turbulent Decade - . 1919-1929. bell-ringer. put examples of society after world war i up on the board. explain why the

The 1850s: A Decade of Crisis - . unit 6 - manifest destiny and the crisis of the union apush mrs. baker. sectional