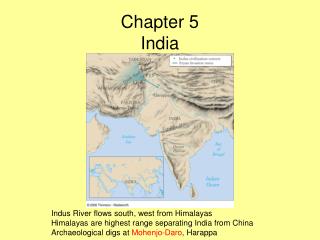 Chapter 5 India. Indus River flows south, west from Himalayas Himalayas are highest range separating India from China Archaeological digs at Mohenjo-Daro , Harappa. Mohenjo-Daro and Harappa. What was there? City probably housed over 100,000 people Many smaller towns also in the area