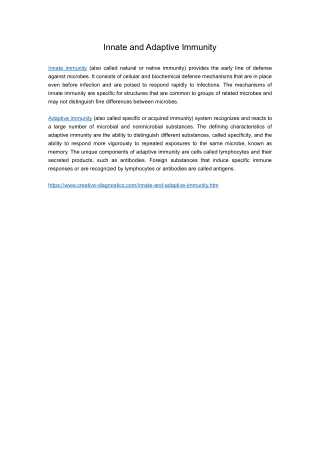 Innate immunity (also called natural or native immunity) provides the early line of defense against microbes. It consists of cellular and biochemical defense mechanisms that are in place even before infection and are poised to respond rapidly to infections. The mechanisms of innate immunity are specific for structures that are common to groups of related microbes and may not distinguish fine differences between microbes.Adaptive immunity (also called specific or acquired immunity) system recognizes and reacts to a large number of microbial and nonmicrobial substances. The defining characteristics of adaptive immunity are the ability to distinguish different substances, called specificity, and the ability to respond more vigorously to repeated exposures to the same microbe, known as memory. The unique components of adaptive immunity are cells called lymphocytes and their secreted products, such as antibodies. Foreign substances that induce specific immune responses or are recognized by lymphocytes or antibodies are called antigens.
https://www.creative-diagnostics.com/innate-and-adaptive-immunity.htm

Chosen problems of immunopathology - . the physiologic function of the immune system is to protect individuals from

ADAPTIVE IMMUNITY - . *to adapt means to become suitable, and adaptive immunity can become “suitable” for and respond