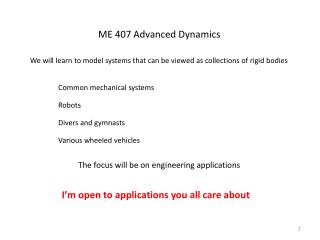 ME 407 Advanced Dynamics. We will learn to model systems that can be viewed as collections of rigid bodies. Common mechanical systems. Robots. Divers and gymnasts. Various wheeled vehicles. The focus will be on engineering applications. I’m open to applications you all care about. Department of Computer Science and Engineering: An Introduction - . the end of computing is not numbers but

Geomorphology: A Red Hot Tool for Investigating Catastrophic Response to Wildfire - . by mimi diaz department of

Cantwell &amp; Chaplinsky - . why is chaplinsky punished for his speech but cantwell is not? what was the result of